Book Review: "Before You Open Your Bible" by Matt Smethurst 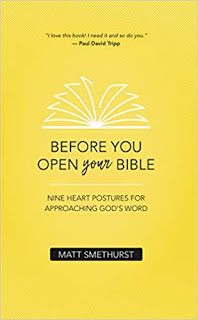 In this amazing book, Matt Smethurst argues that heart postures are necessary prerequisites to Bible reading. He expands on this by explaining nine postures our heart should take when we approach God's word. While this book is short, it is direct in addressing a major issue surrounding the way that we read the Bible: the position of our heart. He begins with a short introduction to the work overall, where he addresses two reasons why individuals do not read the Bible: intimidation with its size and familiarity with its contents. With this, he dives into the position our hearts should take when we approach God's word to read it.

In the first chapter of this book, Smethurst argues that we should approach God's word prayerfully. He writes, "If the Christian faith had a curriculum, the class called 'Prayer Matters' wouldn't be an elective for college; it would be a prerequisite for kindergarten." He also argues that, in addition to praying God's word, we should pray in anticipation of God's word.

In the second chapter of this book, Smethurst argues that we should approach God's word humbly. He writes, "Your Bible is tangible evidence that the Maker of the universe is a communicator; he's someone who initiates, who reveals, who speaks." Arguing that the Creator of the universe wants to communicate with us, he points out that this should humble us.

In the third chapter of the book, Smethurst argues that we should approach God's word with desperation. He tells the story of Michael, his former roommate, and uses this story to make the point that desperation drives us to God. We should allow our desperation to drive us to God rather than to the world.

In the fourth chapter of this book, Smethurst argues that we should approach God's word studiously. That is, we should approach God's word to study it. Using an analogy about his love for Michael Jordan as a youngster and his present love for his wife, he asks, "If we're so careful to study and accurately represent our heroes and lovers, why are we lackadaisical in how we talk about our Creator?" Indeed, he has hit on a major problem in the church. Even among Christians, we don't truly study the Bible enough.

In the fifth chapter, Smethurst points out that we should approach Scripture obediently. He argues that God, who created all things is "far too qualified to govern just one or two small provinces in your life." Indeed, we must come to the Bible with a heart that is willing to obey, because, as Augustine said, "When Scripture speaks, God speaks." Smethurst also points out that, unless obedience is a goal, we are not fulfilling the Great Commission.

In the sixth chapter, Smethurst argues that we should approach God's word joyfully. He points out that, in several places in Scripture, we are told that God's word was spoken or written so that our joy may be complete. This leads to the natural conclusion that we should read Scripture with joy.

In the seventh chapter, Smethurst points out that we should approach God's word expectantly. He tells the story of his friend James and how he came to Christ. While I will not spoil how this all worked out, suffice to say that this story showed the importance of faith in God's word to change a life.

In the eighth chapter, Smethurst points out that we should read God's word communally. We were not made to study God's word in isolation. Smethurst writes, "Christianity is not a solo sport, thankfully. It is a community project, a team effort." In short, we were made for community, especially as we grow in Christ.

The ninth chapter is what Smethurst calls the "most important chapter" of this book. In it, he points out that Scripture should be read Christocentrically. He writes if you miss this, "you miss it all." The entirety of Scripture points to Jesus Christ, and we should not forget this.

Overall, this was a very good read. It can be read in a single sitting, but much of what is written in its pages will need to be thought about. Smethurst has given us a book that every serious Christian should read.
Book Review