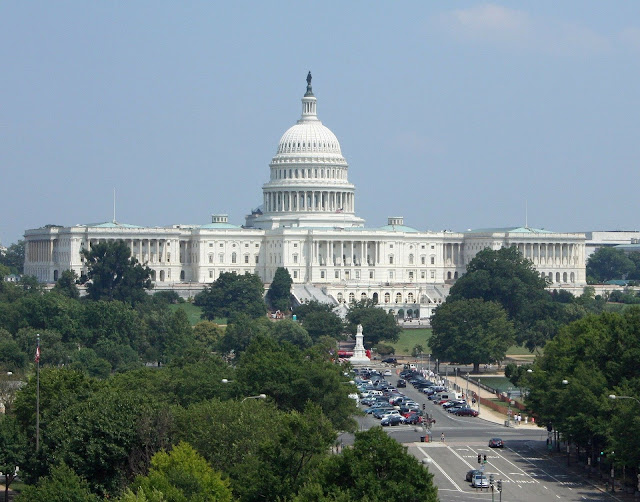 How important is politics to our lives? If many were honest, they would say that, in today's climate, they live and breathe politics. In fact, many Christians, if honest, would admit that they spend more time involved in political debates than with sharing the Gospel. While I do believe we, living in the Republic that we do, have a responsibility to do our civic duty and place into office those we believe most fit, I see a major problem with making politics an idol. If this doesn't seem like a problem, then there is a deeper problem. This is what I mean:
I have shared before about an experience with a particular family member of mine. As we were driving down the road one day, we saw several houses with political yard signs, which was normal, because at the time, it was election season. However, this particular family member, whenever she would see signs for another candidate, would pray, "Oh Lord, change that family's heart. They're voting for [other political candidate here]." While I agree that some issues that have become highly politicized are moral issues for the Church (such as abortion), not all are. The proper motivation for praying for others is love, with the hope that the individual or group will change their heart and come to Christ or draw closer to him. Yet this is what happens when we focus too much on politics and not enough on Christ.
Another, more recent example, is the now-famous prayer by Dr. Walker-Barnes in the book A Rhythm of Prayer. Dr. Walker-Barnes has stated that she was modeling the prayers after the imprecatory psalms. While there are several problems with that, most notably that if this was her purpose, she did very poorly at it, the purpose of this post is not to explore these problems. She has stated that she wrote the prayer in a heated moment. While there is nothing wrong with turning to God in prayer in the difficult moments (and this is actually a practice that I encourage), the problem is with the theology of her prayer. Dr. Walker-Barnes states that she wants God to help her hate white people, or at least want to hate them. She makes it clear that she does not want to hate those who commit actual acts of racism. However, she goes on to make it clear that she wants to hate two groups of white people: Those who voted for Donald Trump, but especially those who claim the Progressive label but aren't doing enough. In short, this prayer is a prayer to hate people because of their politics.
If you think that either one of these is justified, but the other isn't, please re-examine your heart. This is what happens when we let politics become our idol. We begin to hate others (or at least look down on them) based solely on the way that they vote. We end up divided. We end up ignoring Scriptures like 1 John 4:20. We end up ignoring actual evil, choosing instead to focus on those who are different than we are. Instead of trying to win the nation to Jesus, we end up trying to win the nation to a political view, not realizing that when people come to Christ, their hearts will change and, as a result, their views on moral issues will change as well. We opt for the easy route of campaigning for a candidate (or for a political party or political view) instead of the more difficult task of campaigning for Christ. We choose the temporary victory of a politician of our choice in office, while neglecting the eternal victory of a soul won to Christ. If anyone reading this does not see this as a problem, then we need to have another discussion altogether.
If I have described you in this post or stepped on your toes, good. It was intended. Give up idolizing aspects of the political, and instead focus on Christ. If you spend more time focusing on the political than you do on the spiritual, then please reconsider your focus. And don't settle for the temporary political victories. Seek the ultimate victory of souls won for Christ.
Idolatry Politics