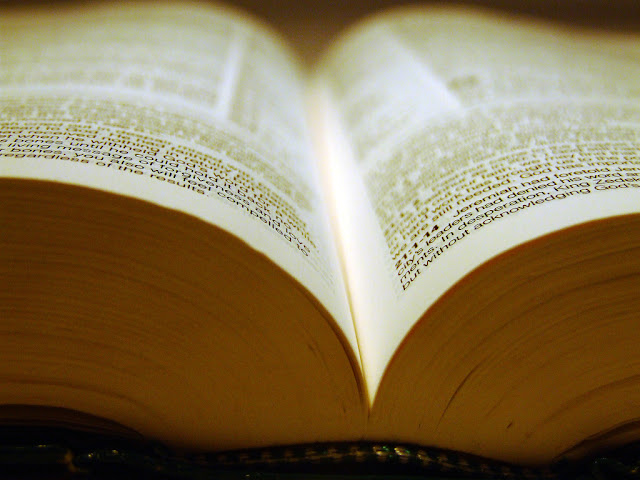 The Church of the Nazarene's article on the Christian Scriptures is as follows:

We believe in the plenary inspiration of the Holy Scriptures, by which we understand the 66 books of the Old and New Testaments, given by divine inspiration, inerrantly revealing the will of God concerning us in all things necessary to our salvation, so that whatever is not contained therein is not to be enjoined as an article of faith.

There are several elements here, and I would like to take them each in turn.

Plenary Inspiration
The Church of the Nazarene affirms the plenary inspiration of Scripture, which means that we affirm that Scripture is inspired throughout. This implies the denial that some parts of Scripture are not inspired. The Church of the Nazarene recognizes the canon of Scripture that most Protestants recognize—the 66 books of the Old and New Testaments. All 66 of these books, regardless of their genre, context, or location in the canon, are completely inspired by God.

To affirm plenary inspiration is also to deny two extreme views concerning Scripture. Gay Leonard notes that, “the word ‘plenary’ also describes a middle ground in debates about inspiration. On one extreme are those, though few in recent years, who believe God dictated every word of Scripture to the biblical authors. On the other extreme are those who believe the Bible is the product of human authors inspired in the same sense that all great authors are inspired.” [1] That is, the official stance of the Church of the Nazarene denies that God dictated every word of Scripture and that inspiration is merely a quality of the humans who penned Scripture.

Sixty-six Books
The Church of the Nazarene recognizes the 66 books of the Protestant canon. While the Roman Catholic and Eastern Orthodox churches accept additional books in addition to these sixty-six, these additional books are viewed by the Church of the Nazarene, and by other Protestant denominations, as non-canonical. The additional books that are accepted by Catholics and Orthodox churches are called apocryphal books, and do not appear to have been considered authoritative by Jesus and His apostles. In fact, it appears that, prior to the time the New Testament was completed, the Old Testament canon was already understood to be fixed. There is, therefore, no need to make a misguided appeal to the Council of Jamnia. [2]
By accepting the traditional Protestant view on the canon, the Church of the Nazarene also rejects modern “non-biblical” revelation that is so prevalent in modern cults. Books such as the “Book of Mormon” and the “Pearl of Great Price” are rejected outright as non-biblical. Nothing in these books, or in the apocryphal books, are to be enjoined as part of our doctrine.

Divine Inspiration
When we understand the divine inspiration of Scripture, we should understand that divine inspiration is a quality of the text itself. This is not to say that the authors of Scripture were not inspired. Scripture appears to testify that those who recorded Scripture were inspired by the Holy Spirit. To limit divine inspiration to either the text alone or to the authors of Scripture alone is to miss the larger picture. Peter describes the prophets, whose writings are recorded in the Old Testament, by stating that, “but prophets, though human, spoke from God as they were carried along by the Holy Spirit” [3]. So, it becomes clear that those who spoke the words that ended up written in the Old Testament were inspired.

In addition, the text itself is inspired. Paul writes to Timothy, “All Scripture is God-breathed and is useful for teaching, rebuking, correcting and training in righteousness, so that the servant of God may be thoroughly equipped for every good work” [4] Here, Paul makes it clear that Scripture itself is inspired, or God-breathed. Given the transmission of text over time, this raises the question of which text is inspired. It is generally understood that the original text (or autographs) were inspired, and we can say today that we have the inspired text in front of us inasmuch as our text is faithful to the autographs [5]. In the words of Richard S. Taylor, Professor Emeritus of Theology and Missions at Nazarene Theological Seminary, “It must be stated first of all that the authority Scripture is unqualified only in the original autographs. In all subsequent copies, versions, and translations, the authority is transmitted only to the extent of their fidelity with the original…….Biblical authority is in every faithful version and translation” [6].

All Things Necessary to Salvation
In modern evangelical circles, there is a debate over the nature of the inerrancy of Scripture. The first view holds that every little detail of Scripture is without error, down to anthropological and cosmological statements. A second view, affirmed by the Church of the Nazarene, affirms that Scripture inerrantly reveals all things necessary for salvation. This statement should not be misconstrued as implying that Scripture is errant. This would be a gross misunderstanding of the Church of the Nazarene’s stance on Scripture. Rather, the Church of the Nazarene recognizes that the primary thrust of Scripture is to point people to salvation in Christ. In other words, Scripture is Christocentric. Furthermore, as Taylor points out, “It would be very wrong to misconstrue this apparently narrow articulation of biblical authority as constituting an implication of error in the Bible of any kind. The statement must be understood in the light of the historical background. The fundamental need was to frame a statement which jwould guard against the Roman Catholic insistence on tradition as an adjunct and virtually coequal authority in determining dogma. The objective was not to limit inerrancy but to exclude tradition.” [7]

Conclusion
The Church of the Nazarene affirms the full inspiration of all 66 books recognized by Protestant churches. We recognize that they are authoritative over our lives, and that whatever is not found within the pages of these 66 books should not be accepted as part of our doctrine. We deny that tradition, reason, or experience are on par with Scripture when it comes to authority. Rather, these things are subservient to Scripture. We affirm that the primary thrust of Scripture is to bring people to a saving knowledge of Jesus Christ, and to that end we recognize that the Bible inerrantly reveals all things necessary for salvation.

Recommended Resource: How We Got the Bible

[1] Gay Leonard, “Articles of Faith,” pp. 28-29
[2] The Council of Jamnia was a council held in the first century AD that is commonly believed to have finalized the canonicity of the Old Testament. This, however, is a myth. The Council of Jamnia did not have binding authority, and canonicity was not discussed. Rather, what was discussed was the understanding of Ecclesiastes and Song of Solomon, and even the canonicity of these two books was not discussed. While the myths surrounding Jamnia are widespread, one thing appears to be clear: the canonicity of Scripture appears to have been fixed, or at least commonly understood to contain certain books, prior to this Council, not at it.
[3] 2 Peter 1:21b
[4] 2 Timothy 3:16-17
[5] While the focus of this article is not on the reliability of the text as we have it, the question will inevitably arise in the minds of some readers. Suffice to say here that textual critics affirm that we can have the utmost confidence in the text as it has been transmitted to us today.
[6] Richard s. Taylor, “Biblical Authority and Christian Faith,” pp. 57,59, emphasis original
[7] Ibid. p. 35, footnote 3, emphasis original.

Articles of Faith Church of the Nazarene Scripture

How God Uses Suffering For Good

According to legend, at the Council of Nicaea, Saint Nicholas (an early saint who is the inspiration for some of the characteristics of Santa Claus) slapped Arius, an Alexandrian priest, over his views on Christ. While the story is likely fictional, we are left asking, "Why would someone want to slap a first century priest from Alexandria, anyway?" The answer lies in the theological teaching of Arius. Arius was an Alexandrian priest who was famous for his theological position on the existence of the Logos who became flesh in the Person of Jesus Christ. Arius was alarmed at a sermon that was preached by Alexander, bishop of Alexandria, when Arius perceived to be close to the Sabellian heresy. Arius led a mini rebellion against the bishop, who ultimately called a synod and vindicated the claim of Jesus to be equal with God, at least temporarily. Final vindication would be left to the Council of Nicaea. Arius believed that the Logos was the first of God's created beings. Whi
Read more

I have previously  written about how to build a free Christian library. In this post, I want to make a list of free Christian Kindle books that I have come across. These books are absolutely free, and can be accessed by anyone with access to Amazon or a Kindle device. I hope to periodically update this post to help maintain an accurate list of free books. This post will not contain a list of every single book. Rather, I will stick to authors that I know are reputable. This does not mean that I agree with every aspect of the individual's theology. Rather, it simply means that these individuals are respected Christian leaders, often from a different tradition than myself. Again, this list will be updated and grow as time goes on. John Bunyan Christian Behavior Grace Abounding to the Chief of Sinners The Heavenly Footman John Bunyan's Poetry The Pilgrim's Progress (Modern English) The Pilgrim's Progress (Youth Edition) Dwight L. Moody Daniel, Man of
Read more

Misquoting Paul: Work Out Your Own Salvation

Scripture : Philippians 2:12-13 When you examine major world religions, a few things stick out. One of the more prominent things that sticks out is that every other major world religion is based largely on a system of works. According to Hinduism, for example, those who do good in this life will be reincarnated at a higher caste than they are in during this life. In Islam, it is taught that there is are two angels standing next to each person. One angel records that person's good deeds, while the angel on the other side records the person's bad deeds. It is important for the sake of salvation that a person's good deeds outweigh his or her bad deeds. Of course, none of these other faiths have a solid ground for objective good and evil. Christianity is the notable exception to this, with salvation being purely by God's grace through faith in Christ. This is the clear teaching of the New Testament, that salvation is by grace and not by works. Yet there are some who cite
Read more