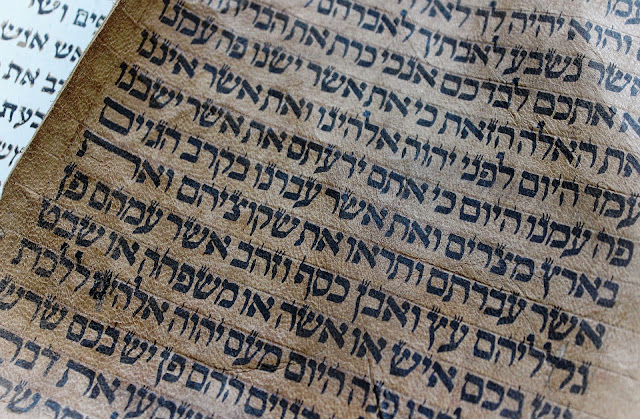 Some of you may be wondering why I would take the time to do both a podcast episode AND a blog post about Hebrew poetry. That seems to be a bit much, doesn't it? After all, isn't the concept of Hebrew poetry old and outdated? It just seems so foreign to us, doesn't it? Aren't there things that are more worth our time than studying Hebrew poetry? I would argue that there are few things that are more worthy of our attention. If we are going to be serious about our study of Scripture, then there are several reasons why we should study Hebrew poetry.
If you have read the Old Testament for more than 5 minutes, you have probably come across a section of poetry, whether you realize it or not. Hebrew poetry is found throughout the Old Testament, and is contained in quotes in the New Testament. In fact, approximately 1/3 of the Bible is poetic in nature. There are entire books that are written in poetic form, including Job, Psalms, Proverbs, and Song of Solomon.  This means that, unless we have a basic understanding of Hebrew poetry, we can easily miss some important aspects of Scripture. For this reason, we cannot afford to delay a study of Hebrew poetry.
Hebrew Poetry differs from English poetry in several ways. The markers of English poetry are usually understood as rhythm and rhyme. We need not look far to see this. A simple poem is enough to make this point. Let's take the children's poem Jack and Jill:
"Jack and Jill
went up the hill
to fetch a pail of water.
Jack fell down
and broke his crown
and Jill came tumbling after."
Notice both the rhyme and rhythm of this children's poem. We know that this is an English poem because it has these features. Likewise, Hebrew poetry can be identified by certain features. While rhyme is not a mark of Hebrew poetry, Hebrew poetry has a different primary mark: parallelism. Parallelism occurs when one line, called a cola, completes another line. While there are several different types of parallelism, three deserve special attention: synonymous parallelism, antithetical parallelism, and synthetic parallelism.
Synonymous parallelism occurs when one line repeats the first in a synonymous way. This can be found in Psalm 2:2, which states that "The kings of the earth set themselves, and the rulers take counsel together, against the LORD and against his Anointed." In this verse, the "kings of the earth" are synonymous with "the rulers," and to "set themselves" against the LORD is to "take counsel together" against God's Anointed. Because these are synonymous, this verse provides an example of synonymous parallelism.
Antithetical parallelism is the opposite of synonymous parallelism. The key idea behind antithetical parallelism is a contrast. Psalm 1:6 provides a good example of antithetical parallelism. It states, "for the LORD knows the way of the righteous, but the way of the wicked will perish." The key word that gives this particular verse away as antithetical is the word "but." The contrast is between the way of the righteous and the way of the wicked. The way of the righteous is known intimately by God, but the way of the wicked will perish.
Synthetic parallelism is the third major type of parallelism. In synthetic parallelism, the second line simply completes the thought of the first line. There is no comparison or contrast. It is simply a completion of what was said before. An example of this can be found in Proverbs 21:4, which states, "Haughty eyes and a proud heart, the lamp of the wicked, are sin." Notice how there is no comparison or contrast. The author is simply completing his thought in two different lines.
Some pieces of Hebrew poetry, most notably Psalms 9-10, Psalm 119, the entire book of Lamentations, and Proverbs 31:10-31, are presented in the form of an acrostic. That is, each line begins with the next letter of the Hebrew alphabet. We are not easily able to pick this up in translation, but this is another way to distinguish Hebrew poetry. Narratives and didactic literature in the Bible do not come in the form of an acrostic, so where the text has an acrostic, it is poetic.
There is also some debate over whether or not meter is part of Hebrew poetry. At my current understanding, I do not see enough reason to believe that it is a necessary component of Hebrew poetry. In fact, I think that the lack of a discernable meter in many of the Psalms, which are by their nature poetic, argues against this as a necessary feature of Hebrew poetry.
Overall, Hebrew poetry is not an incredibly complex topic. It simply requires us to think in a way that we are not used to thinking. While English poetry is marked by rhyme and rhythm, Hebrew poetry is marked by parallelism and, occasionally, an acrostic structure.
Hebrew Poetry Psalms