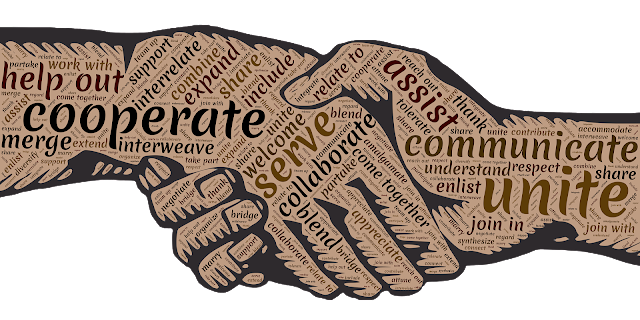 Scripture: Philippians 2:1-2
It doesn't take more than a quick glance at the news to see that we live in a divided world. In fact, it has often been said that we are more divided now than ever. I can say that we are more divided now than at any time I remember in my own life. This doesn't just go for our world, our culture, or our society, however. It also goes for the Church. The Church is also polarized right now. Some of this is attributable to a failure of Christians, including Christian leaders, to study Scripture on their own. Some of it is attributable to the politicizing of the pulpit. Some of it is attributable to other factors. Regardless, the polarization of the Church is not a good thing. If we are divided, we are, by definition, not united.
So what does unity look like? Perhaps it would be better to cover the basics of another post that I have written and briefly address what unity does--and doesn't--look like. Let's start with what unity is not. Unity is not found in agreeing on every single doctrine of Scripture. Of course, there are primary issues that, unless you believe, you cannot properly call yourself Christian, such as the doctrine of the Trinity. However, not every issue is a primary issue. There are brothers and sisters who disagree on secondary issues and tertiary issues all the time, yet these are not reasons to divide ourselves. Church unity also does not look like mere organization. A group of people can be organized without having unity. For example, if a group of people are well organized, but cannot agree on the reason why they came together as a group, then you have an organized, albeit divided, group of people. Church unity also does not look like a group of people voting the same way. There are Christians who disagree on political issues, but that does not mean they are not your brother or sister in Christ. Church unity is also not defined by a church's worship style. Again, these are things that we can disagree on. That is the point, we can disagree on all of these things and still be Christians. What unites us, then? It is one word: Love. What unites Christians are a love for the Father, Son, and Holy Spirit, a love for their brothers and sisters in Christ, a love for their neighbors, and a love for their enemies. It is love that defines us. This may be what Paul is getting at in this section of the letter to the Philippians.
Paul starts this section by giving a series of big if's. Paul makes a request from the Philippians, but he first makes a quick statement. All of the points that he lists here are markers of a united Church. Mutual encouragement in Christ is a mark of a unified church. As is consolation in love. As is the fellowship of the Holy Spirit. As is affection for one another. As is compassion. When a church is full of these things, it is a sign that the church is unified. When we fail to show these things, then we fall into disunity. These are things that we should practice and live out in our daily lives. To fail to do so is to fail to be unified.
After listing these things, Paul makes a big request from the Philippians. Paul requested that the Philippians make his joy complete. The question that we need to ask is how? The answer is found in verse 2. Paul desired that the Philippians complete his joy by being of the same mind. That is, they were to be united in the way that they think. This does not entail agreeing on every small thing, but it does mean that the Philippians were to have the same kind of mindset.
The Philippians were also to complete Paul's joy by maintaining the same love. This is presumably a love for God and a love for others, as expressed above in the introduction. If we do not love the same Jesus, we are not part of the same body. If we do not have love for one another and love for our neighbors and enemies, then we are not living in a unified manner.
The Philippians were also to complete Paul's joy by being united in spirit and intent on one purpose. This purpose becomes clear in the next section of this passage, where Paul talks about imitating the example that Christ gave. Paul uses the example of Christ's humility to make this point. Practically speaking, Church unity bears itself out in a body that looks like Christ.
In summary, Church unity is not found in politics, worship style, organization, or the like. Rather, it is found in what Paul points out in this passage: a united purpose and spirit that plays itself out in love for God and love for others. So the question that we have to ask ourselves is this: Is your church united or divided? If divided, what can be done to fix it?
Philippians Series