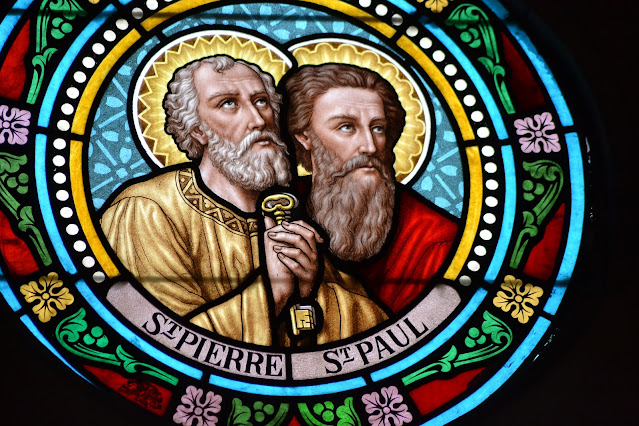 If you have talked with enough people, you have likely heard someone say something along the lines of "I do more good things than bad, so God will let me have eternal life." This myth is especially prevalent in American culture, where the message of the Gospel is often Americanized. You may also have heard someone say something along the lines of "I'm a better Christian than [insert name here] because I belong to [insert political party here]." The idea is that, if someone is a good Christian, they will belong to whichever political party you belong to. How about, "I am part of [insert denomination here], so I am a better Christian than [insert person from another denomination here]." There are countless other examples that I could use, but I think that you get the point. The thing that is consistent with all of these things is that they judge how good of a Christian a person is based on things that are not inherent to being a Christian. If we believe that salvation is by grace through faith in Christ alone, then a person is not considered a Christian based on what political party they belong to or what denomination they are a part of or how much they do for charity. This is not what makes a person a Christian. In other words, a person is not a Christian based on the works that he or she does. He or she is a Christian based on his or her faith in Christ. This is exactly the point that Paul is making in the passage in front of us today.

Paul opens this section by warning the Philippians to look out for "those who mutilate the flesh." By this, Paul was referring to a group called the Judaizers. This group, in short, believed that a person had to become a Jew in the fullest sense in order to become a Christian. This meant that men had to undergo circumcision, and those who became Christians had to follow every aspect of the Old Testament Law.  Paul had some history with the Judaizers. It was the Judaizers that he opposed at the Jerusalem Council (Acts 15:1-35). The Council ultimately sided with Paul and Peter against the Judaizers, but this did not put an end to the heresy of the Judaizers. They continued to plague the Churches for, from what we can tell, quite some time after the decision of the Jerusalem Council.

It appears that the Judaizers were boastful about who they were. Perhaps they were boasting that they were true Christians because they had been circumcised and kept the Law. They were boasting in the flesh about their heritage and the works that they had done. Paul is quick to point out that, if anyone has a reason to boast, then it was him. Paul essentially issued a challenge to the Judaizers. Paul was circumcised on the eighth day, just as was required by the Mosaic Law. He had been part of the people of Israel from his earliest days. He was a pure-blooded Hebrew. His family line was entirely Hebrew, not part Hebrew and part Gentile. He was from the Tribe of Benjamin, which was the Tribe from which Israel's first king, Saul, came. He was a Pharisee, a group that was dedicated to strict observance of every detail of the Law. He formerly had so much zeal for his Jewish faith that he persecuted the Church. He was blameless in regards to his keeping of the Law. The point Paul is making is that, whatever the Judaizers had to brag about, Paul had even more to brag about. However, instead of boasting, Paul chose to place his faith not in his own works or own national identity, but in Christ.

We can all take a lesson from Paul's book. No matter how much we have to brag about, it is ultimately nothing. As Paul will say in the very next verse, whatever we gained from the things we formerly had to boast about should be counted as loss for the sake of Christ (v.7). At the end of the day, we have nothing to boast about except what Christ has done for us. Let's thank him today for that.