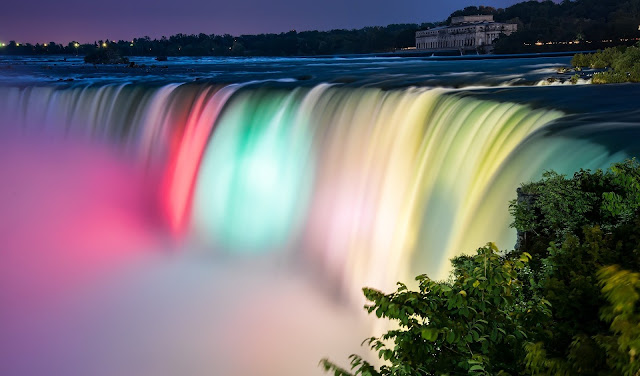 If someone were to come to you and tell you that they saw the waterfall above, and that most of the water were several colors of the rainbow, how would you respond? It may sound extraordinary, right? After all, water is typically blueish. If that person then mentioned that it was because they had colored lights behind that waterfall, would it make sense. I believe it would. A simple explanation is sufficient to explain what seems to be an extraordinary claim. Without realizing it, we take simple explanations as sufficient for explaining what is by most standards extraordinary all the time. Yet, several modern atheists abandon this whenever it comes to matters of faith.

If you have watched any theist vs atheist debate, you have likely heard the claim that "extraordinary claims require extraordinary evidence". The idea behind this claim is that, as claims become more extravagant, the evidence required to validate these claims needs to be more extravagant. I have several issues with this statement.

First, we need to know what qualifies as an "extraordinary claim"? When challenging a claim based on how extraordinary it is, we need to ask why this claim is considered extraordinary. What makes a claim "extraordinary"? Where some claims "extraordinary" in the past but not "extraordinary" now? Are some claims "extraordinary" in some cultures, but not so in others? Extraordinary in comparison to what? In my experience, most individuals who make this claim seem to imply that anything that does not line up with the philosophy of naturalism is "extraordinary." The naturalists who hold to this view apparently do not realize that, if this is a presupposition to any claim they make, they have begged the question and committed a logical fallacy. Yet by this standard, any worldview could claim that anything contrary to its own presuppositions are "extraordinary." Without a solid definition of what counts as an "extraordinary claim," this becomes an almost meaningless statement.Second, in a similar way, we need to know what qualifies as "extraordinary evidence." There is no category of evidence called "extraordinary." It doesn't exist. So, what exactly are those who make this statement asking for? Without understanding the type of evidence that can be considered "extraordinary," the concept of "extraordinary evidence" becomes meaningless. The individual asking for this type of evidence may as well be asking us to produce a square circle. These individuals cannot also have in mind any type of physical evidence, or anything that can be touched, felt, smelled, at least. Yet this does not account for several other types of truth that cannot be accessed by the senses. They also cannot mean anything ordinary, since the "ordinary extraordinary" is a contradiction in terms. They cannot mean that claims that they believe are extraordinary require additional proof, since this commits a fallacy by "moving the goalposts." What exactly are they asking for?A major issue with the concept presented by this statement is that we all hold beliefs that are, or were at one point, extraordinary. For example, the claim made by Nicolaus Copernicus that the sun was the center of our solar system seemed extraordinary in his time. Should his theory have been rejected because the only evidence available at the time was what we would consider ordinary? Should we all believe in a geocentric solar system? Was more evidence required in Copernicus's time than the amount of evidence required today? Was this ordinary evidence considered "extraordinary" at this time? If so, then what determines when "extraordinary" evidence becomes "ordinary," or vice-versa? Of course, I don't think that anyone reading this would deny that the earth revolves around the sun. We could make this same point of several theories believed by many philosophical naturalists today, such as the existence of the multiverse or the evolution of biological life. This philosophy is selectively and arbitrarily applied.Another extraordinary claim, when viewed in the context of the "big picture," is your own existence. There are literally dozens of constants and quantities that, if altered by the slightest bit, would prohibit our universe from existing, and as a result, prohibit you from existing. Think about this. Then think about all of the conditions that were necessary for life to exist at all on this planet. If our planet were slightly closer to the sun, we would burn up. If it were slightly farther, we would freeze. Then think about all of the steps that were necessary to bring YOU into physical existence. Your parents had to meet at a certain place and certain time. Before that, your grandparents had to meet and get together. The same has to be true of your great grandparents, and so on. If even one of these steps were broken, someone might exist, but that someone would not be you. That someone would be someone else. Granted the statistical impossibility of the sequence of events required to bring you into existence, your own existence is an extraordinary claim. Yet I do not know of anyone who would deny their own existence, and if someone did deny their own existence, I would have to ask who is denying it. We all accept our own existence as fact, without going back in history and proving and tracing every single event that led to our existence. No extraordinary evidence is offered.Finally, it seems to me that the claim, "extraordinary claims require extraordinary evidence" is itself an extraordinary claim not backed by extraordinary evidence. In other words, it does not meet its own burden of proof. If the claim had been, "claims require a reason to believe the claim," perhaps I could sympathize with the one making the claim. However, given the fatal flaws with the idea that "extraordinary claims require extraordinary evidence," I cannot accept it as a philosophy, and neither should anyone who pursues truth.
Apologetics